Team Cherry checking in for a long-past due Silksong development update. Let’s get into it for our post-E3 wrap edition!

E3 just happened in LA and Hollow Knight: Silksong was on the floor thanks to Nintendo. The playable demo drew crowds throughout all 3 days of the event and offered a sneak peek at two areas from the game: The Moss Grotto, a lush, damp area and the Deep Docks, a groaning structure atop (and within) a lake of lava.

A few of our fantastic friends at Nintendo Treehouse did a stellar run-through during their Treehouse Live segment, so if you’re curious to see more of Hornet in action (and don’t mind some light early game spoilers) have a watch of the video below!

As Hornet ascends from the foundations of Pharloom towards the citadel at its crest, she may pass through the wasted caverns of Greymoor. The misted fields and dilapidated towers are now infested with Crawbugs, devious nesting types, and the former tenders of the land have become haunted. In the pens at this land’s height, keepers wrangle swarms of Dustroaches, rapid-breeding pests with insatiable appetites. 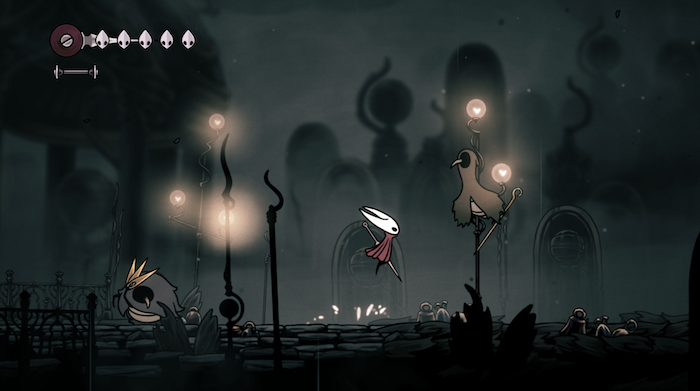 Greymoor is a huge area, one of the biggest we’ve ever created. Within its caves and structures Hornet will uncover many mysteries, make several new friends and duel with a lethal, lunging foe.

We’ve been tight-lipped on Silksong gameplay details, and for the most part we want to keep it that way! Discovery is a huge part of Hollow Knight so we don’t want to spoil all the new systems and surprises. Saying that, we’re going to quickly run-down a few basic bits and pieces. If you want to go in completely clean jump to the next section now!

In Hollow Knight, the Knight gathers soul by striking enemies and can Focus that soul to heal its shell. 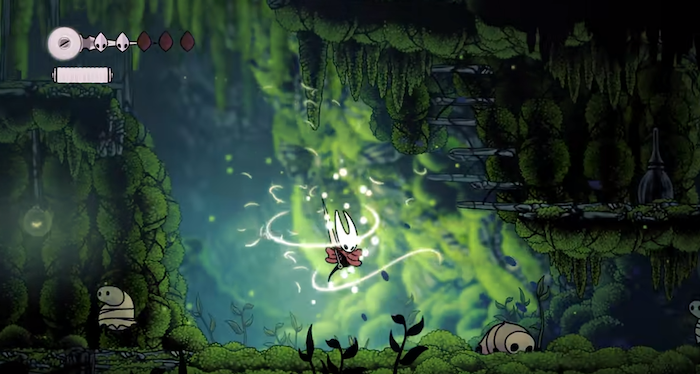 In Silksong, Hornet possesses similar skills, though her abilities are tied to the silk she produces. For Hornet, silk and soul are inseparably bound, her life-force fused with her thread. When enough silk is held Hornet can Bind, wrapping her wounds and readying herself for further battle and exploration.

But Hornet’s Bind is significantly different from the Knight’s Focus. For one, it’s lightning fast! She’ll Bind in a blink and can even Bind in mid-air. Even better - you’ll begin the game able to heal 3 masks with a single Bind, a major boon for a low-health-Hornet which can turn the tide of a duel.

Surely there’s a limit to all this power? And yes! Unlike the Knight, Hornet’s Bind consumes her full (starting) spool of silk. It’s all or nothing!

And of course, even as fast and as powerful as Bind is, if Hornet gets hit during the action, the healing effect will be wasted and the silk will be gone! Staying alert is highly advised!

Hornet’s healing ability matches her Hunter identity, flipping battles from moments of near defeat to empowered strength in an instant! It’s a tense, lethal flow that we’re thrilled for you to experience in the final game.

As in Hollow Knight, defeat in Silksong can occur swiftly and often. Where the Knight left a Shade upon defeat, Hornet leaves a cocoon. This fragile container holds a full stock of silk! Experienced players can make tactical use of the cocoon, breaking it open only when most needed, late in a boss fight or challenging encounter, to give Hornet an extra edge.

Hornet has a voice! Though she isn’t the type to speak at length, Hornet’s not afraid to engage in conversation where necessary. 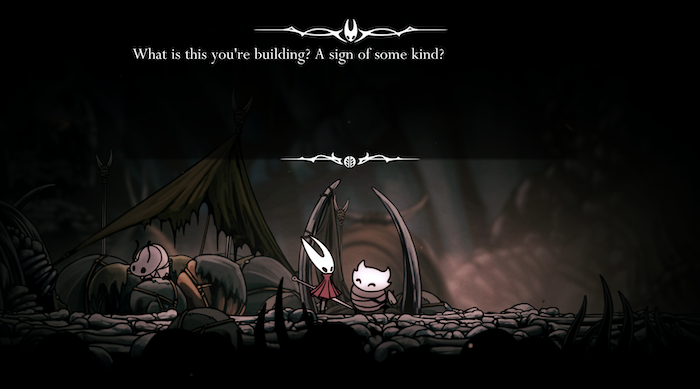 This has been a profound change for Hollow Knight’s sequel and has presented numerous unexpected challenges, not the least of which is all the extra dialogue to write! When your protagonist can talk back, word counts expand fast.

But never fear! As with Hollow Knight, we’re designing with all players in mind. Dialogue and narrative are there for those that seek it. For those that don’t, you’ll be able to ignore nearly all characters and get on with your exploring, hunting and powering up!

Charting the caverns of Pharloom is one of the most important and active tasks that Hornet will embark on in her new journey. Fortunately, as she treks into unfamiliar lands, she’ll meet Shakra, who’ll aid her with charts, compasses and various other tools. 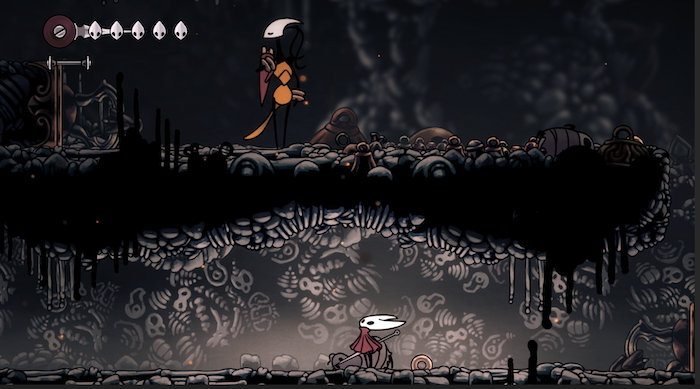 For fans of Hollow Knight, the mapping of Pharloom will be a familiar process, using the same tools and same restrictions. Get ready to again step into lands blind to their layout and transform over time from a lost wanderer to an experienced wayfarer, with the many paths of Pharloom seared forever into your brain.

For several characters in Silksong we’ve been reaching out to select friends from the Hollow Knight community to provide voices. They’ve provided some twisted and over-the-top performances and have given much needed variety to Silksong’s larger cast.

Thanks to Silksong’s E3 demo one character in particular has been receiving lots of special attention, the deadly fencer Lace. As the climactic boss fight of the demo sequence, she’s a huge test of player skill, similar to the Knight’s fight with Hornet in the original game.

Lace is voiced by Mitsuki Hashimoto, one of the earliest and most active members of Hollow Knight’s fan art community. A huge thank you to Mitsuki for bringing Lace to life in all her sadistic glee!

Thanks to everyone for asking and we’re sorry that we still don't have anything conclusive to say. For Silksong we’re running on Cherry-time over here, that means both ‘When it’s ready,’ and ‘When it matches the quality and scale of Hollow Knight.’ Just know, we will talk about a release date when we’re 100% certain we can hit it. The last thing we want to do is make promises, only to see things slide. For now, we’ll continue stuffing all sorts of strange critters and surprises into Silksong. We can’t wait for you all to play it. 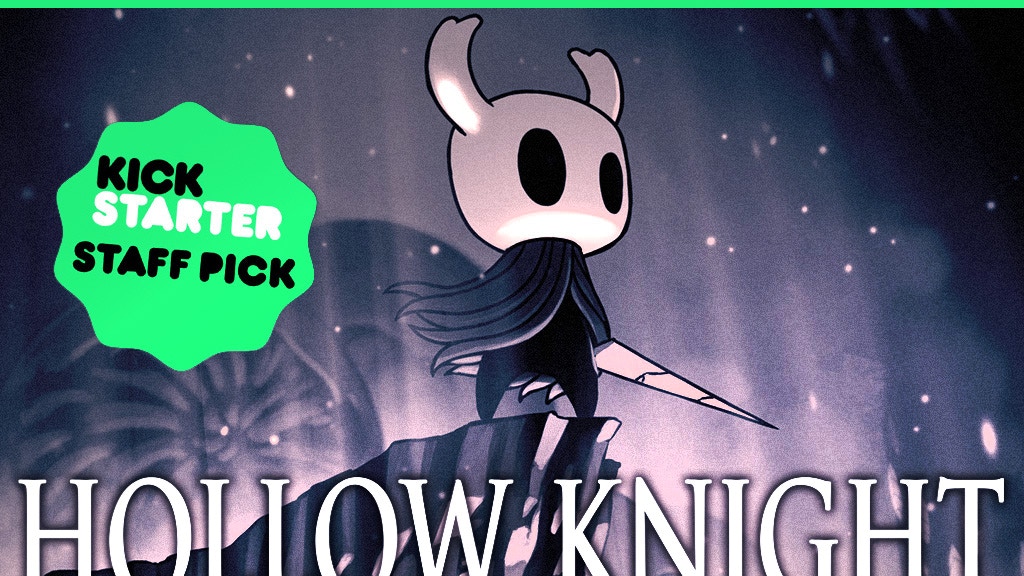 Team Cherry checking in for a long-past due Silksong development update. Let’s get into it for our post-E3 wrap edition! E3 2019 E3 just happened in LA and Hollow Knight: Silksong was on the floor thanks to Nintendo. The playable demo drew crowds throughout all 3 days of the event and offered a...

www.kickstarter.com
You must log in or register to reply here.