Canadians have closed schools and shut down large parts of the economy to deal with the threat of the novel coronavirus.

Encouragingly, public health experts say that a graph of positive tests shows that the sacrifice is working.

“This is a good-news graph,” says Steven Hoffman of York University.

“The good news is that it’s not a straight line and that it’s actually curving downwards, which is exactly what we would want to see. These lines don’t show that the outbreak is ending. The number of cases might be going up. It’s just not going up as fast as we would have expected in the absence of intervention.”

“Overall, it’s a positive graph,” she says. “All the provinces are bending — you want them to be as flat as possible. They are all headed in the right direction, which is a positive sign.”

The graph above will continue to be updated as new data becomes available.

Epidemiologists use graphs like this in part to see how long it takes infections to double — the longer the period, the better.

“That’s just a convenient way to think about it: there’s nothing special about doubling,” Hoffman says.

“You could also say how many days it it is before it gets 10 times bigger. It’s a helpful measure of the pace of what we’re trying to slow down. At this point, our focus is not on stopping the spread of an outbreak but slowing down how fast it spreads.”
Click to expand... 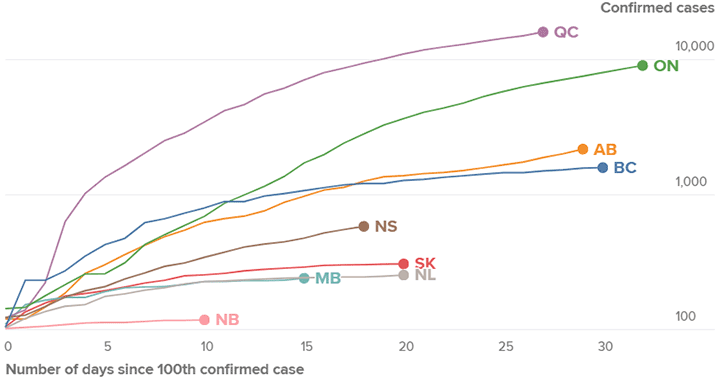 Public health experts say that a graph of positive tests shows that sacrifices to flatten the coronavirus curve are working in Canada.

Atlantic: The City That Has Flattened the Coronavirus Curve
Apr 13, 2020 by Maddox
G
Canada coronavirus death toll is almost 10K
Nov 8, 2020 by GameWise

The post-pandemic city: Expert on how the coronavirus will impact future cities
Mar 24, 2020 by Nat