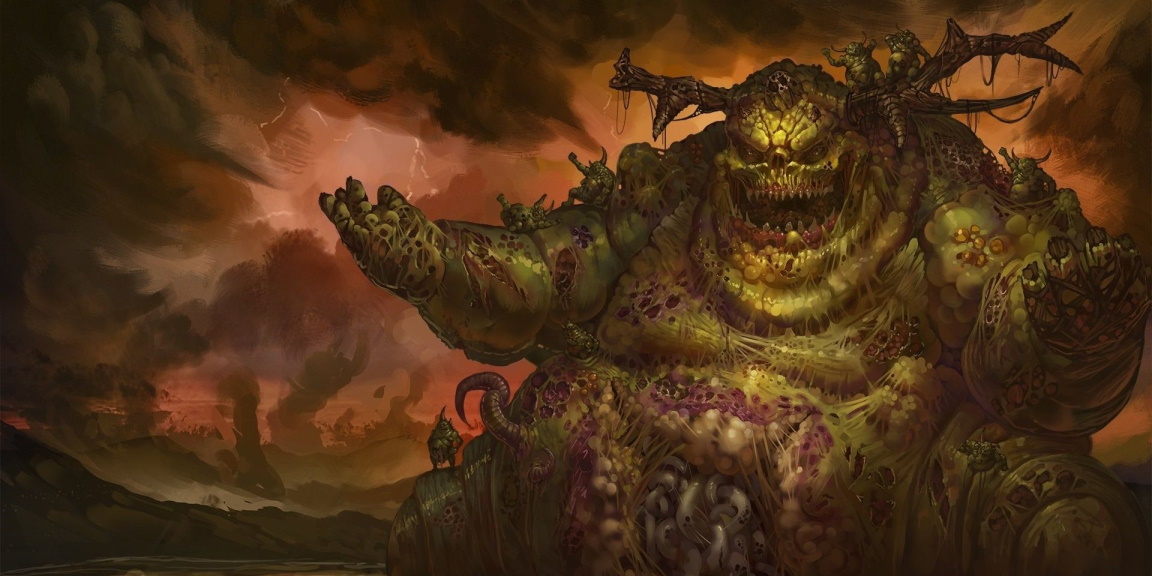 The Ruinous Powers bide their time as they slowly destroy the known cosmos, ever craving more power. The Gods of Chaos in Warhammer 40K feed on the emotions, hopes, and passions of mortal creatures for sustenance and power. They live in the warp, an alternate reality made up entirely of pure psychic energy. They are very powerful sentient forces that want to corrupt and consume the brains and souls of the galaxy's inhabitants, while not being divine or even having physical stature. The evil gods can only grow through mortals' actions and thoughts.

Khorne, the blood god who revels in primal bloodshed, Tzeentch, the lord of change who relies on sorcery and knowledge to further aspirations, Nurgle, the plague father who embodies illness, death, and rebirth, and Slaanesh, the black prince of pleasure are the four primary Gods of Chaos. Each has their own realm within the warp. Each is poised to outdo the other to become Warhammer 40K's ultimate chaos deity.

Check out this article if you want to learn about Warhammer 40K factions.

The chaos deity of sickness, dissolution, despair, death, and rebirth, also known as the Plaguefather, Lord of Decay, and Grandfather Nurgle, is deeply concerned and intimately involved in the misery of mortals. Nurgle understands mortals' oldest fears: death, anguish, and misery. Nurgle represents rebirth and survival, as degradation is only one element of life's cycle. The Plaguefather prefers those who enjoy spreading his ichor and sickness, as well as those who want to live in a cruel and miserable world.

Although Nurgle is depicted as a doom and gloom figure, the god also has a pleasant and compassionate side. Because there is life in death. Nurgle conveys the idea that hope and inspiration can be found even in the darkest of times. As a result, Nurgle concocts and transmits diseases and poisons as a 'gift.' When a pandemic strikes, his followers cheer because the diseases are considered as gifts and opportunities for diseased mortals to overcome and embrace.

The Death Guard traitor legion is among Nurgle's most dedicated. His warp dominion is supposed to be filled with rotten and decaying gardens and wetlands, enough to make even the most steadfast sick with just one sniff. One of the surviving Aeldari gods, Isha, is also said to be imprisoned there. Because of her regeneration abilities, Nurgle uses her to test his latest plague concoctions.

The chaotic deity of knowledge, ambition, deception, fate, magic, and intrigue is known as the Lord of Change and Architect of Fate. Tzeentch gets his power from individuals who want to change or advance. Tzeentch is also concerned with the nature of mortal evolution and mutation, which he is said to direct and affect. Tzeentch weaves a sophisticated and massive web of schemes and treachery in order to become the ultimate conqueror among the chaos gods. Each thread is tied to a servant who has made a bargain with Tzeentch and is employed to carry out the Lord of Change's plans.

Tzeentch is drawn to using mortals as puppets because of his ability to influence and control them. Scholars seeking prohibited or ancient information, leaders attempting to politically crush their opponents, and even disadvantaged individuals seeking to alter their society for the better are all drawn to the Architect of Fate. Tzeentch might use any of them as a pawn.

Tzeentch's values, which embody the concepts of development, progress, and hope, inevitably clash with Nurgle, the Lord of Decay, who represents stagnation, dissolution, and decay. Both sides' slaves frequently clash with one another as they wage war on other galaxy dwellers. Tzeentch favours Magnus the Red's Thousand Sons traitor legion. Tzeentch's ultimate intentions and infinite web of deception will finally strangle everything in existence, endlessly scheming and manipulating.

Slaanesh is the masculine and feminine chaos deity of pleasure, hedonism, and decadence, as well as the Imperium Of Man's Lord of Excess and Dark Prince, and the Aeldari or Eldar race's 'She Who Thirsts.' Pride, self-indulgence, and full-fledged lust consume those who succumb to Slaanesh's corruption. Anyone can become a Slaanesh devotee; those who seek solace in material items or sexual pleasures might readily fall into Slaanesh's embrace. Slaanesh feeds on this temptation, promising more from the shadows to those who strive for perfection, whether it's the devoted painter creating aesthetic wonders or the warrior sharpening his swordsmanship.

Slaanesh, the youngest of the chaos gods, was born in part due to the Eldar. Legend has it that the ancient Eldar species began to indulge in extravagance and hedonism. Pleasure cults that were solely concerned with the pursuit of pleasure grew increasingly depraved and extreme over time. The unified Eldar race's actions eventually culminated in Slaanesh's 'birth-scream,' signifying the Aeldari's demise. The destruction and carnage were so severe that Slaanesh ate billions of Aeldari in a single night. The 'Eye Of Terror,' a spatial rift-storm where many chaos space marine armies and daemons resided, was formed.

Except for three Aeldari gods, Slaanesh murdered and consumed many of the Aeldari gods in the subsequent pandemonium. Slaanesh grew to despise Khorne because if the blood god hadn't intervened in Slaanesh's combat with Khaine, the Aeldari god of war, Slaanesh would have swallowed Khaine's essence. The Emperor's Children, led by Primarch Fulgrim, are Slaanesh's favourite legion. Slaanesh, a cunning and cunning monster, will bide his or her time until mortal empires fall to their pleasures.

The Chaos God of Strength, War, Hatred, Murder, and Rage, Khorne is the Blood God and Lord Of Skulls himself. Khorne gets his strength and power from the wants and actions that revolve around cruelty, hatred, and primal destruction of one's foes. Every murder and killing is thought to empower Khorne, and the more bloodshed, the better. Khorne, on the other hand, values honour and glory in fight, favouring and rewarding acts that defy the odds.

Khorne's ambition is to consume the cosmos in flames and slaughter, to destroy or conquer everything in existence everywhere until only broken bones and rivers of blood remain. Worshipping Khorne entails spilling the blood of both opponents and allies, because the battlefield is his temple, and all the slain are seen as equal in Khorne's sight. It makes no difference whether warriors kill or destroy on purpose, because Khorne will reap the benefits of all deaths. The only sin for Khorne's adherents is to go a day without murdering, as doing so enrages the blood god.

Slaanesh is Khorne's greatest rival among the other chaos gods, and Slaaneshi warriors who battle for status and pleasure rather than properly proving their metal against mighty foes are looked down upon by Khorne's servants. Khorne likewise despises Tzeentch's followers because they look to be deceitful sorcerers who do not fight honourably. The World Eaters, headed by the famed daemon prince and Primarch Angron, are Khorne's favourite traitor legion.

There is, indeed, a fifth chaos deity. Malice, although not being one of the great four, stands out from the rest due to his reputation as a renegade. Malice, sometimes known as the Lost God, is a god of chaos, devastation, and retribution (even against itself and its agents that serve the cause).

Malice was expelled, and no one knows where he currently stays. Malice's followers must be willing to kill and bleed other chaos agents and animals, thus it's no surprise that the other chaos gods and their minions despise and despise Malice. Malice is still seen as a threat by the other gods of chaos and the Imperium, despite the fact that few followers survive long enough to be worthy slaves in Warhammer 40K.
Click to expand...