Yesterday, Intel launched its fastest laptop CPU to date, the Core i9-10980HK based on the 14nm Comet Lake-H architecture. We got to see several products using high-end enthusiast-grade designs from various manufacturers but the question still remains, how does the new chip fares against AMD's flagship laptop CPU, the Ryzen 9 4900H. We got to see performance previews of the chip early on but one crucial and determining factor of the chip would be its efficiency that matters a lot in notebook form factors.

Intel's 10th Gen Core i9-10980HK 8 Core CPU A Real Power Hog - Highest Clocks of a Laptop CPU But at 135+ Watts
The Intel Core i9-10980HK is a beast in all aspects, it's a 5 GHz+ behemoth of a chip for laptops and is currently featured on insane laptops with the best GPUs available from NVIDIA. With that said, it does have its flaw and a major one is its power consumption which is actually something notebook users should be concerned about.

The CPU features 8 cores and 16 threads which are clocked at a base frequency of 2.4 GHz and a maximum boost frequency of 5.3 GHz. The 5 GHz+ frequency is actually determined by the TVB or Thermal Velocity Boost algorithm which is an opportunistic frequency taking into account the power and thermal headroom available to the chip in each respective notebook design. But while Intel did share the specifications of its CPU, they didn't explicitly mention the power draw or the thermal limits for TVB.

As we know, the 45W TDP figure is rounded at the base frequency (PL1) which is 2.4 GHz. There's a staggering difference between the base and max frequency and as such, you should also expect a higher power draw when the chip is hitting past 5 GHz. The PL2 base power draw is suggested at a 107 Watts while the PL2 max (5 GHz+) power draw is suggested at 135W+ which is 10W higher than the Core i9-9980HK, the previous flagship.

Not only that, but the CPU has two TVB configurations, a 100 MHz bump (5.1 GHz) which only kicks in if the CPU temperatures are between 65-85 degrees (C) and a 200 MHz bump (5.3 GHz) which kicks in if the CPU is under 65C. You can tell that not all laptop configurations based on the Core i9-10980HK can sustain the chip at such high clock speeds and as such, only a few flagship and bulky designs will be able to keep the chip under 65C while running it at 5.3 GHz or even 5.2 GHz clocks.

Just for comparison, HXL (@9550pro) shared the results of an AMD Ryzen 9 3950X configured CLEVO laptop, similar to the XMG APEX 15 notebook we talked about a few days ago. The laptop which is outfitted with a desktop 16 core Ryzen 9 3950X at 65W ECO mode has a maximum power consumption of 60-65W with all cores at 3.5-3.7 GHz in the AIDA64 CPU stress test and up to 75W power consumption (all cores at 3.2-3.4 GHz) in the AIDA64 Stress FPU + Furmark test. The Intel CPU is almost twice as much power-hungry than the AMD chip with twice as many cores being pushed to 3.7 GHz which says a lot about its outdated 14nm architecture.

Now there are a few concerns which many consumers raise about high-end gaming notebooks such as their bulky design and the need to carry an external power brick to keep these power-hungry machines up and running, even for regular workloads. This sort of hardware requires extra power, and the whole purpose of high-end gaming notebooks is to have a portable PC that you can carry around whenever you want.

Modern advancements have dropped down the weight of these high-end gaming notebooks down to just 2 kgs which although is a lot heavier than standard PC laptops, but if you want the extra power and don't want to carry your desktop around with you in a cafe or workplace then this is the way to go.

It's good to see that Intel is pushing the 14nm node as much as they can, still squeezing extra levels of performance out of the old node, but the time has come for a much-needed change and hopefully, Tiger Lake-H changes that.
Click to expand... 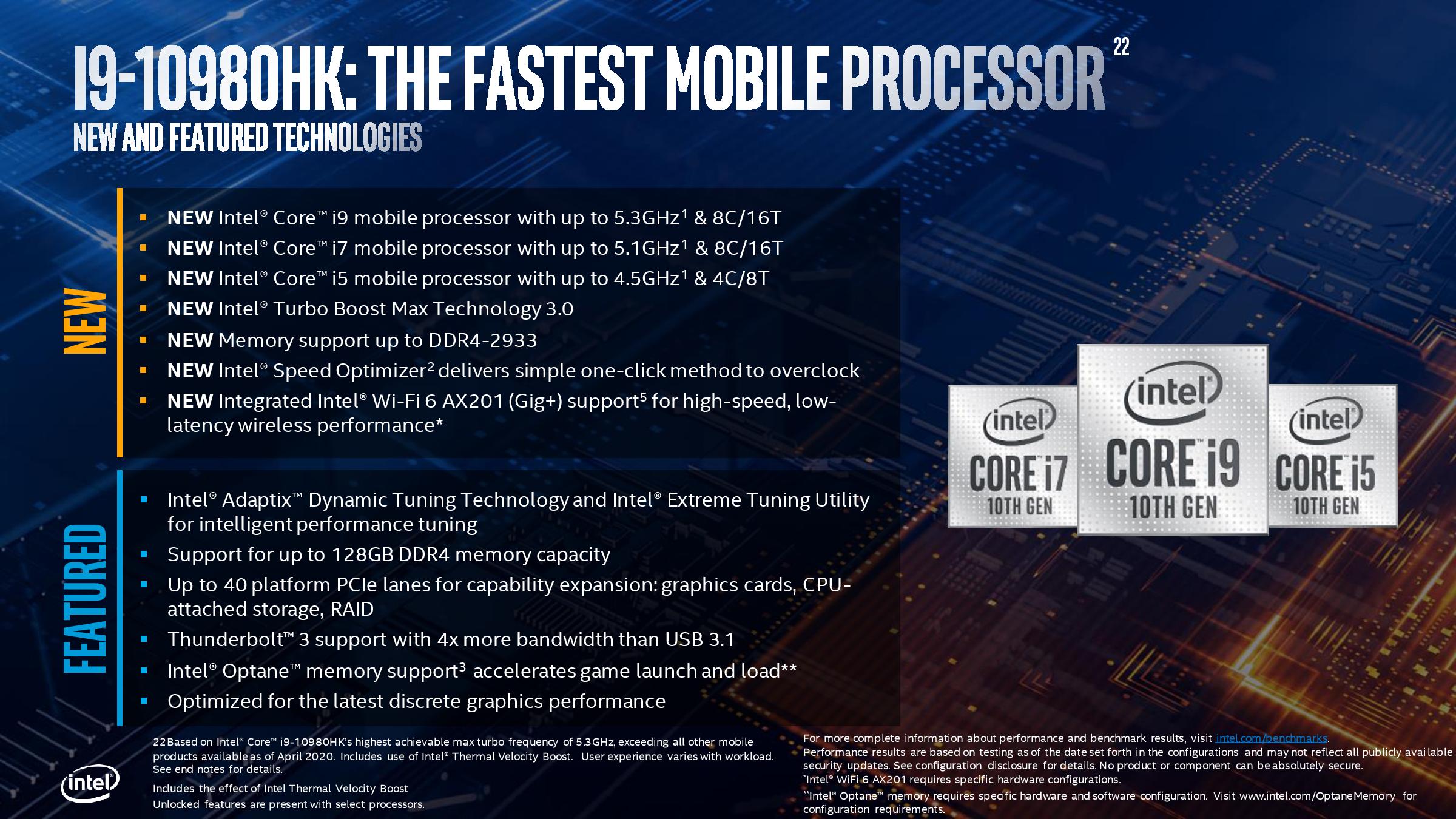 Intel released its fastest laptop CPU, the 10th Gen Core i9-10980HK but while its the highest clocked mobile chip, it's also a power hog.

Seems high for wattage, but then again it is a i9, would love to have one if I could afford it.
You must log in or register to reply here.