I recently paid nearly £500 to view archives of Variety. Grosses for films in North America are available since 1922 for movies, but it didn't become a top 50 weekly chart until around April or May of 1969. There's no way to view this data anywhere else on the Internet. And IMDb doesn't even have this info. What's annoying though, is that it just lists 50 films each week, their rank, gross, and previous week's gross if it charted. But no genres are listed. How can you tell if something is action or horror? You can save the archived pages, but it's very awkward.

Box Office Mojo used to have comprehensive information for films from 1982 up to now, as the weekend box office more or less began in early 1982. But much of that data is now pay-to-view since the site got refurbished around October.

This information should be free to anybody online anyway; I'm a fan of movies, and I would like to be able to obtain comprehensive data for free. Now websites are forcing enthusiasts like me to pay for to look at info. For example, you used to be able to search by genre. That option is gone. Now finding out essential facts are not possible, unless you pay a monthly or annual sum. It's kind of ridiculous. You can get lots of free charts online for music and video games, so why not for the year's most popular motion pictures as well?

That sucks, but are you sure you can't view the data from another website that may post it publicly?

There's a site called "The Numbers" which unfortunately, isn't that great.

Box Office Mojo used to be a great site for looking up info about films from 1982 up to now. I think the reason they don't really cover films older than 1981 is that there was no real weekend box office chart until around early 1982.

From 1969, Variety began publishing the weekly top 50 grossing films chart on a Wednesday. They still did so even after 1982, but I think cinemas consider films shown Friday through Sunday starting from 1982, to be the biggest hits of the week. Nonetheless, a film can still be a weekly number one, but not peak at the weekend. Since there was no weekend chart prior to 1982, that means that a weekly number one was probably officially that week's biggest film, as that's how it was documented prior to 1982. I've actually got e-chart books from Amazon, where the author kind of explains all of this stuff.

Prior to April 1969, they just published 12 to 15 of that week's most popular movies. But it wasn't really a chart. It was just a list of films with their estimated earnings from 4 or so key cities. So I assume whatever got the highest amount of cash made, was that week's "chart topper" (despite there being no chart).

Here's an example of what the top 50 films chart looked like, almost 5 decades ago. This info is not publicly available. You have to pay either a monthly fee for 50 database searches, or nearly £500 for an annual fee. You're not restricted at what you can view if you take the latter option, although it cost me a mint. 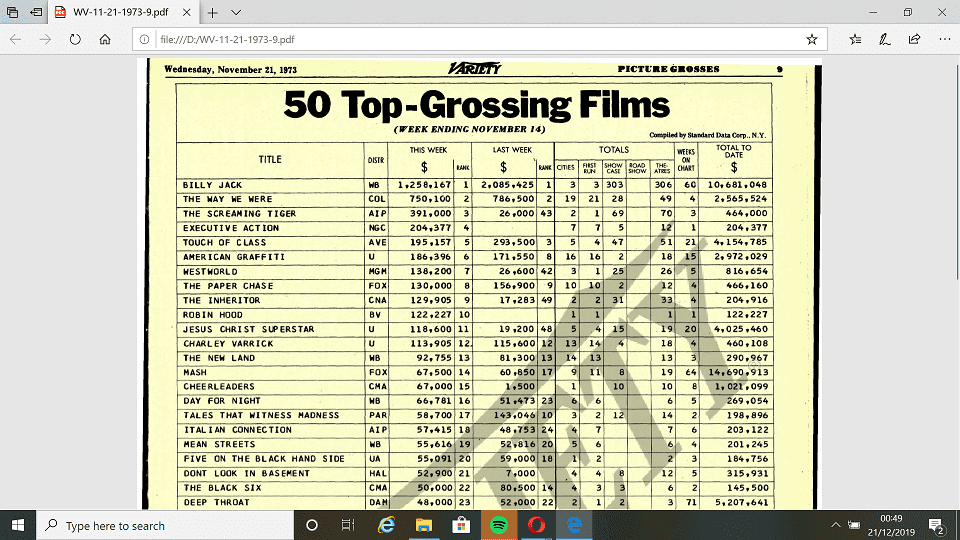 I don't care how much movies grossed in the box office. lol

I really just collected these pages to get an indication of the most popular movies every month throughout the years. Shame on them for not making this into a book. What makes sense?

I have to do the 90's and so on. I cannot really be bothered going through all of these pages. It's too much hassle.