President Donald Trump said on Wednesday he believes China’s handling of the coronavirus is proof that Beijing “will do anything they can” to make him lose his re-election bid in November.

In an interview with Reuters in the Oval Office, Trump talked tough on China and said he was looking at different options in terms of consequences for Beijing over the virus. “I can do a lot,” he said.

Asked whether he was considering the use of tariffs or even debt write-offs for China, Trump would not offer specifics. “There are many things I can do,” he said. “We’re looking for what happened.”

“China will do anything they can to have me lose this race,” said Trump. He said he believes Beijing wants his Democratic opponent, Joe Biden, to win the race to ease the pressure Trump has placed on China over trade and other issues.

“They’re constantly using public relations to try to make it like they’re innocent parties,” he said of Chinese officials.
Click to expand...

Trump also said South Korea has agreed to pay the United States more money for a defense cooperation agreement but would not be drawn out on how much.

“We can make a deal. They want to make a deal,” Trump said. “They’ve agreed to pay a lot of money. They’re paying a lot more money than they did when I got here” in January 2017.
Click to expand...

Trump talks about the economy:

Trump sounded wistful about the strong economy that he had enjoyed compared with now, when millions of people have lost their jobs and GDP is faltering.

“We were rocking before this happened. We had the greatest economy in history,” he said.
Click to expand...

And he talked to Reuters about the recently released UFO video from the U.S Navy:

At the end of the half-hour interview, Trump offered remarks about a newly released Navy video purportedly showing an unidentified flying object. 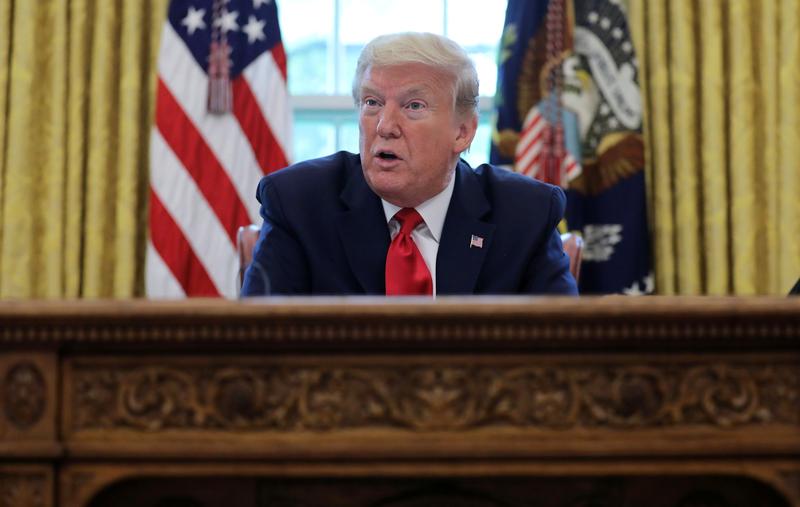 U.S. President Donald Trump said he believes China's handling of the coronavirus pandemic is proof that Beijing "will do anything they can" to make him lose his re-election bid in November.

Trump says he wants blue states to give him "sanctuary-city adjustments" in exchange for federal financial relief
Apr 28, 2020 by Ana

Trump wants to pardon himself in the final days of his presidency
Jan 21, 2021 by Demon_skeith

Trump says he only will submit to GOP oversight for his administration
May 5, 2020 by Tek