E-commerce creates many online sales. Merchants need a platform for online selling such as Amazon and eBay. Now, a third player, Shopify, has become recently a fast growing company. This is a Canadian e-commerce platform that enables people to build their own online stores.

Shopify gives merchants access to many features and apps to help small businesses sell their products directly. They can also list products on marketplaces and social media sites across the internet. The company second-quarter 2019 report is impressive. It posted a 48% year-over-year increase in revenue to $362 million.

Shopify is making efforts to expand. It recently announced a $450 million deal to acquire 6 River Systems, a warehouse fulfillment company specializing in warehouse robotics and cloud software. This acquisition helps to support its new business, Shopify Fulfillment Network. This new business was introduced in June. The company makes efforts to give merchants lower shipping costs and enhanced delivery services.

Shopify Inc. is a Canadian multinational e-commerce company headquartered in Ottawa, Ontario. The company reported that it had more than 800,000 businesses in about 175 countries using its platform as of December 31, 2018. The total gross merchandise volume exceeded $41.1 billion for 2018.

Analysts are expecting this stock to climb higher. 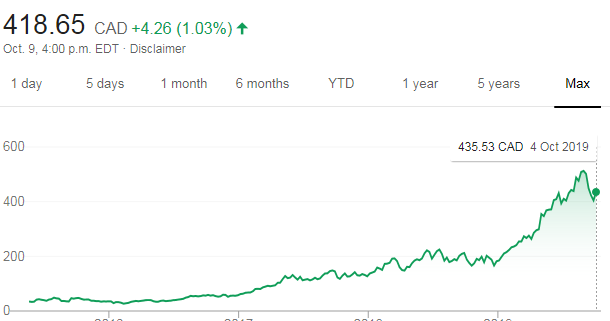 www.igorbnews.com
You must log in or register to reply here.