Shakedown: Hawaii to release on Wii and Wii U in summer 2020 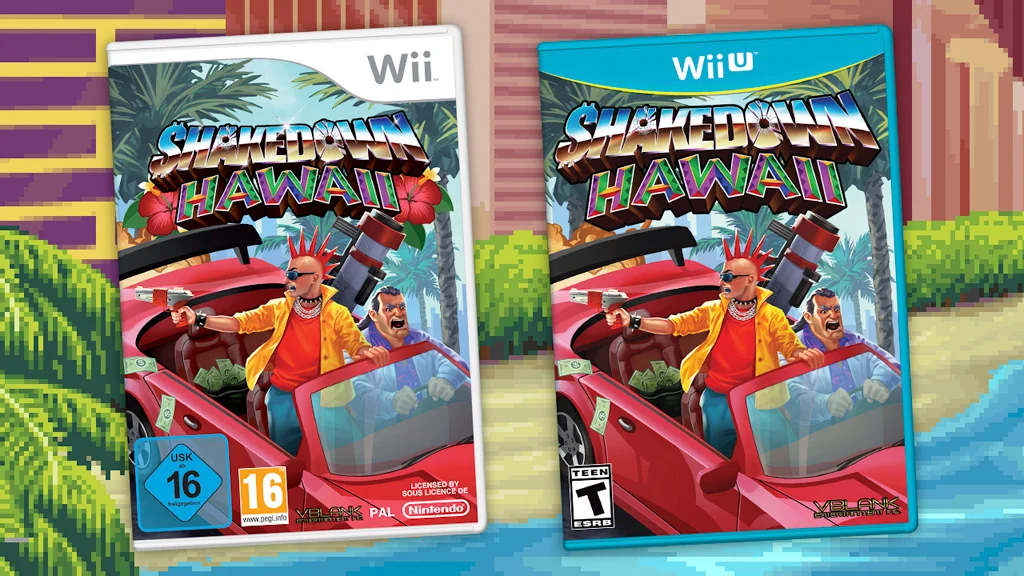 Shakedown: Hawaii is releasing on the Wii and Wii U in summer 2020, Vblank Entertainment has announced.

Here are all of the relevant details:

The Wii and Wii U versions include all of the currently released content and feature updates, including the Mogul Update, the Full Tank Update, and the many other little tweaks, improvements and optimizations that went into the game post-launch.

Both versions will also allow you to experience the game in the most retro way possible… in 4:3 on your old CRT televisions… and in my opinion, it looks glorious!

The Wii version supports both 50hz and 60hz, and both NTSC and PAL output. It supports the Wii Remote (with shake!), Wii Classic Controller, Wii Classic Controller Pro, and GameCube Controller. I took special care to ensure it parallels the experience of the more powerful platforms, and further optimized it to fit entirely into the Wii system memory. This means that you won’t experience any disc load times during gameplay. Once the game boots, you’re in!

Vblank has stated that there will only be a PAL version of Shakedown: Hawaii for Wii:

While it still feels like yesterday, it’s been nearly 14 years since the Wii launched. Although we’ve still seen some Wii releases over the past few years, seeing one more wasn’t a given. Indeed, despite my best efforts, it just wasn’t in cards anymore, at least, not for North America. However, as luck would have it, the doors hadn’t quite closed yet with Nintendo of Europe, so it was still able see a release! Words truly can’t express how appreciative I am, and I can’t thank them enough for all the heavy lifting they did on their end to make it a reality. It’s meant the world to me, and these Wii discs specifically hold an immense place in my heart.

As incredibly as it all worked out, unfortunately, Wii discs aren’t region-free, and I didn’t want North American players to be left out. Although I continued talks with NOA, floating around a Plan B, Plan C… Plan Z, sadly, every idea hit a wall. The clock was ticking, and after exhausting all other options, I decided to pivot to the next best thing: the Wii U. After all, the Wii U still supported Wii Remotes, Wii Classic Controllers, and even 4:3! So, I rushed against time to port Shakedown: Hawaii to Wii U as well, and get it through certification before that door could close too!
Click to expand...

Shakedown: Hawaii is currently available on the Switch and 3DS but will be coming to Wii in July, followed by Wii U in August.

Let us know what you think in the comments below!

Command & Conquer Remastered Collection to release on PC in June

Leak may just have revealed PlayStation 5 release date, price and much more!