Not many games can break FromSoftware’s soulsborne monopoly, but the original Nioh, which released between Bloodborne and Sekiro, did just that. It’s the only non-FromSoftware genre game to hold its bloodied head high alongside that dev’s hits. With PS4 exclusive Nioh 2, Team Ninja is hoping to take the concept even further.

Influenced by Onimusha and Diablo as much as Dark Souls and Team Ninja’s own Ninja Gaiden, the original Nioh was an alt-history slasher with a unique 17th-century Japanese setting filled with demonic samurai and a lot of dying.

Nioh 2 shifts gear and introduces a new hero who’s part human and can tap into the supernatural power of the yokai (demons) to transform into some truly bizarre forms, used to gain the upper hand against some of the game’s Sengoku-period monstrosities.

"His transformation from human to fiend will take him deep into the Dark Realm of the yokai," explains Team Ninja creative director Tom Lee. "I promise you that this metamorphosis will be spectacular and result in some truly intense action." 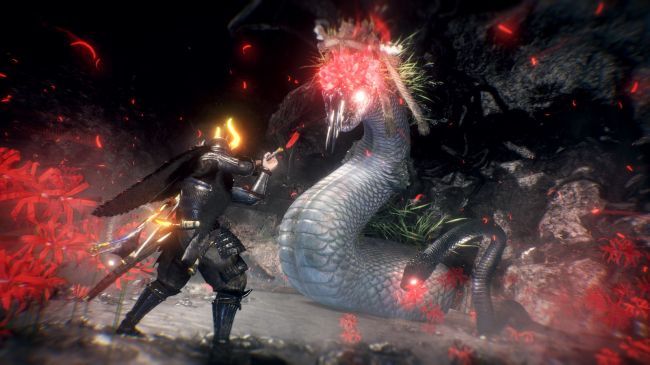 Before you can even put a sword through an angry imp and tap into the demon-powered craziness, the game offers a detailed character customisation setup, which is new for this sequel. Here you can tailor everything from your hero’s gender and hair to those well-earned scars, as well as voice and tone, and even 'horn type'. It really showcases this sequel’s visual upgrade nicely.

In-game it’s striking how much of a step up from the first game Nioh 2 actually is – while rival Sekiro is perhaps a better-looking game, Team Ninja has doubled down on plenty of gameplay-focused technical tricks to ensure the act of hitting creatures in their many eyes feels incredible. In particular, the game is locked at 60fps on both standard PS4 and PS4 Pro and uses a new HDR system absent from the original game – if you select the default Action mode. Movie mode, by contrast, increases the visual fidelity but drops to 30fps. That you have these choices on both PS4 and PS4 Pro is admirable. 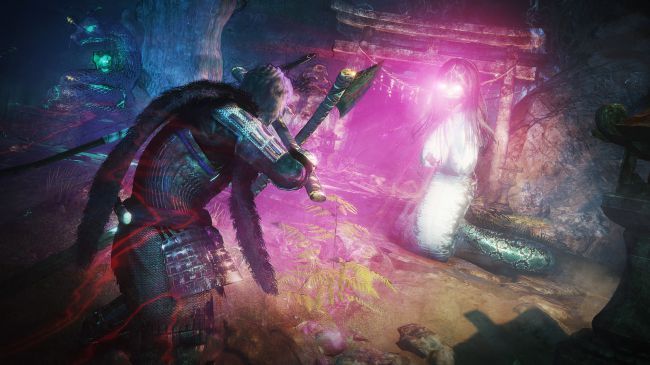 n the midst of the action it means we can see the tiniest details, from straw in the muddy floor to the worn wood of the huts and buildings that make up this early stage. The ground looks solid and sure under the hero’s feet. The sun shining overhead is warm; it casts long shadows across the buildings and picks up the puddles and mounds of earth that make up the paths ahead.

While the world itself can look static, the animation of the main hero and the cast of monstrosities that lie ahead is beautifully done. The movement is elegant and the characters drip with personality as much as blood. Subtle flourishes in a monster’s hair and robes add to the effect. But these are designed to be clear enough to see a strike forming, with tells easily gauged for a quick dodge. 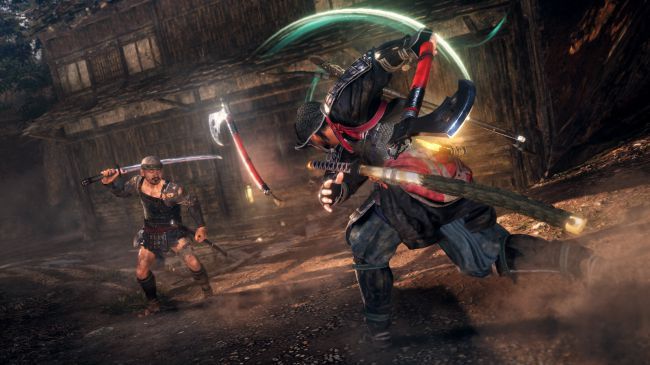 Like the original game, Nioh 2 is a little more complicated than your average soulsborne. The basic fight-by-fight tussle comes from dodging and blocking attacks and using the Stance system to return the favour.

Switching stance between High, Mid, and Low styles during a duel (by holding R1 and hitting Triangle, Square, or X) can catch an enemy off-guard or exploit a weakness, but each technique has its pros and cons. For example, High stance is powerful but leaves you defenceless and vulnerable to counters, while Mid is balanced and offers a wide range of techniques, and Low is a defensive posture but only lands light taps – good for keeping enemies at sword’s length while you rethink your approach.

Each attack depletes your stamina-like Ki meter, while successful hits release blue Ki orbs from an enemy and a timed tap of R1 absorbs the energy through a Ki Pulse move – though note you’re vulnerable while you do so. This risk/reward is the rhythmic beating heart of both Nioh and its sequel, but this time some subtle changes have been made. 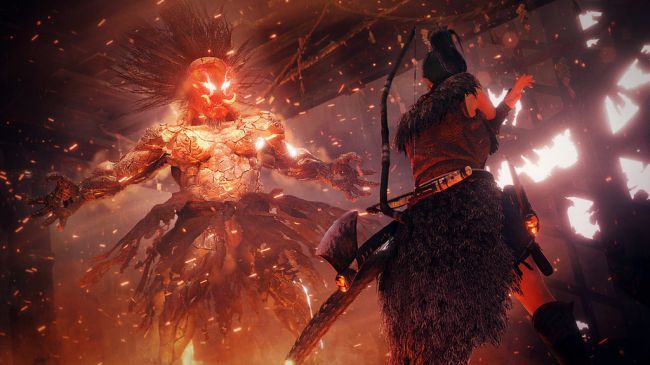 What’s new to Nioh 2 are the types of weapons you can now use within this fighting system. Whether using large, oversized swords or the new dual-wielding hatchets, you can tell the devs furrowed their brows over the way the original got compared to Diablo and came up with far more ways to spill blood. Seeking out weapons and armour sets becomes a must. The double-dose hatchets have fast become a favourite; swift and deadly and open to combos, they’re a great addition to the Nioh formula. They can even be thrown with a charged attack if you’re in the correct stance to use this new move.

You can find new weapons in the world, either on the bodies of defeated enemies or in hidden chests that often require a certain Yokai level to open. Yokai is the demonic force found in the world (as well as the Japanese word for ‘demon’), and powers your beastly moves and imbues weapons with buffs and abilities.

How do the new corrupted weapons change the game? 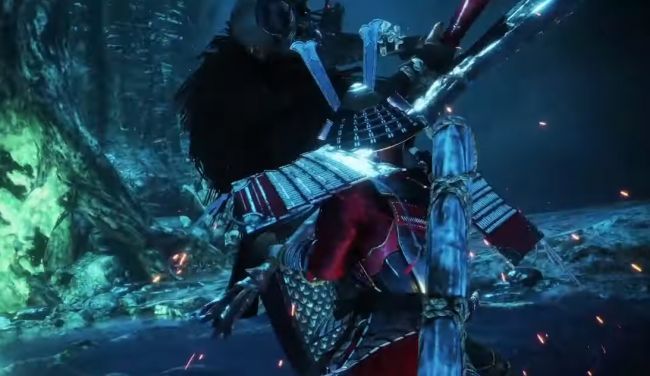 There are two types of ‘effects’ that weapons can hold in Nioh 2. First, there’s Blessed, which deals ‘purity’ damage in a similar way to the original game’s elemental attacks. If that sounds too similar, then consider that with each block with a Blessed weapon fills your Ki meter – enabling you to perform a Ki Pulse after each block rather than an attack. This spins the Nioh combat system on its head. Now scuttling defensive players can be rewarded as each successful block earns Ki to then put into attacks.

The second effect is Corrupted, which imbues your killing steel of choice with added damage bonuses, but also gives you the ability to hurl a projectile while landing a heavy attack. In game we see our character somersault into the air and, mid-arc, throw a dagger before landing a devastating blow – all while the screen fills with blue, orange, and green lighting effects. It’s very cool. It also has the bonus of enabling you to do more Ki damage to enemies, and fills the Yokai energy meter faster than normal – which is important because you can now harness Yokai energy to transform into crazy demons or unleash monstrous new attacks.

When you kill a yokai some may drop Soul Cores, and equipping these enables you to tap into demonic skills. Some will enable you to momentarily turn into the yokai the Soul Core was harvested from, while others will mean you can call on the yokai itself to aid you in a fight. Each Soul Core has its own stats and buffs, turning the yokai into a weird new meta-game.

The Yokai system is similar to the elemental setup of the first game, with a meter beneath your health bar filling as you land hits, but instead of imbuing your sword with magical attacks you weaponise the demons themselves. And given Nioh 2 has an expanded cast of crazies, including a weird one-footed mini-boss with more hair than body that hops at you swinging a mighty hammer, you’re going to have heaps of fun just collecting them all. 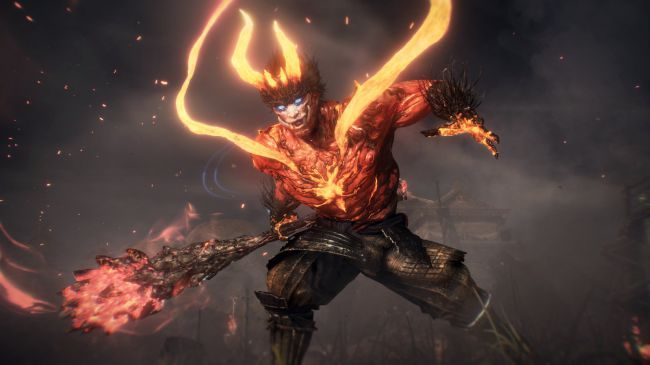 It goes one step further. Your character themself becomes the conduit of the Yokai energy. When your Yokai meter is maxed out, holding the correct button combinations will transform your samurai into a demonic alter-ego complete with new attacks and combos.

Entering this Yokai Shift mode turns your hero into a monstrous being whose innate abilities, buffs, and look are influenced by the kind of Guardian you’ve partnered with (there are three Guardians, and you can swap between them at shrines found in the world).

We’ve seen the huge ogre in action. It hulking frame belies agility and skill with many weapons and looks to be the balanced, ‘hero’ fighting form. The others, an agile wolf-like creature resembling Okami’s Amaterasu with a bloodlust offers pace and light attacks, while a demonic magician that can unleash long-range attacks is your go-to cheap shot if an enemy is proving too tough to go toe-to-toe with.

During this Yokai state your health and Ki meters are replaced by a Yokai Shift gauge, which depletes over time but can be refilled in the same manner as Ki – holding e gathers Yokai Force released by landing hits on enemies. Holding w sucks in Amrita energy, making your weapons more powerful and even extending their range – a club, for example, can morph impressively into a screen-filling baton of fiery death. It sounds complicated, but in game it’s far simpler and results in a visual spectacle as your demonic Yokai self swells its weapon’s size and turns the tables on an infuriating mid-level boss. 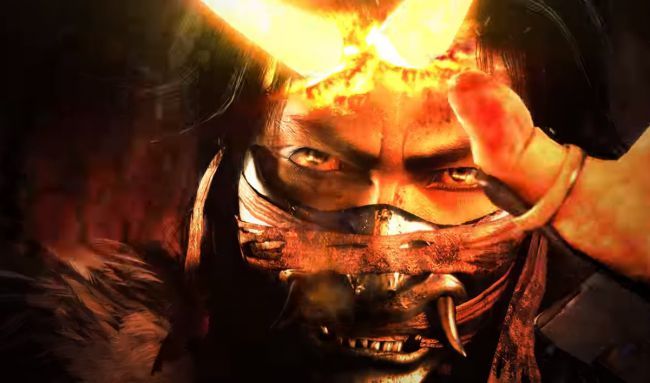 Team Ninja’s additions give extra depth to an original game that was already an involved take on the soulsborne phenomenon, though the stages we’ve been shown to date are a little barren. (They’re filled with the kind of secret routes and hidden areas we’d expect from the likes of Diablo but are arguably not as stylised as those of Sekiro.)

With enough new ideas to the core combat it feels like Nioh 2 is shaping into a worthy sequel. Team Ninja to date is the only dev to place a glove on FromSoftware, so we’re betting on the Koei Tecmo/Sony team-up to deliver some surprises, and a sleeper hit, only on PlayStation 4.
Click to expand...

Game looks good, though I didn't think the PlayStation magazine was still around?
You must log in or register to reply here.

Official Playstation Magazine: The next-gen starts on June 2 issue as we reveal the latest games coming to PS5
Apr 28, 2020 by Nova