Moose fighting in the driveway

Moose fighting in the driveway - this looks pretty good. Thanks for amazing animal footage. This is entertaining to watch. Looks like this happened in Alaska.

Moose typically aren't aggressive towards people. If provoked, they can be deadly. Unlike deer, moose aren't usually afraid of humans, so they won't run away just because you're there.

Adult moose can run as fast as 35 miles per hour. They are excellent swimmers. They can cross large expanses swimming up to 6 miles per hour for two hours at one time. Moose usually weigh 25 to 35 pounds at birth. Calves can run within a few days and swim well within two weeks.

If you see a moose: talk calmly and back away. Give the animal about 50 feet of personal space. Dogs might provoke moose. Don't throw things or offer food.

Most of the time, the reason that male moose fight is over females or territory (which they would hope is full of females). The point is not a fight to the death. The point is to push harder and show that he's stronger. Whoever can move the other one out of the way wins. 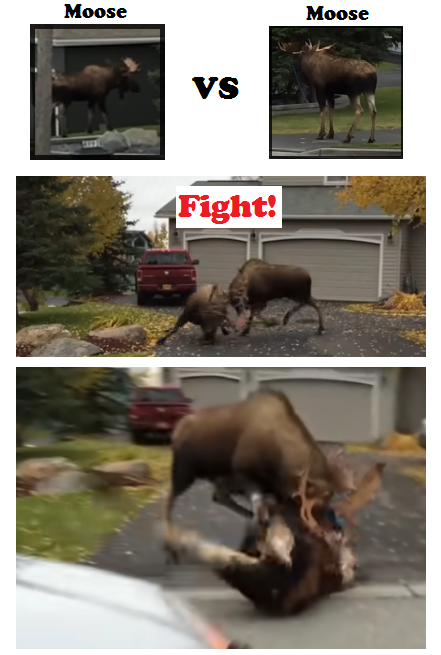 Moose fighting in the driveway
You must log in or register to reply here.