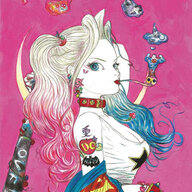 Finished it minutes ago. The whole things was totally enthralling. I have never played another game that felt so bloodlusty. The gameplay was really compelling. All of the weapons had their uses, and I liked how I needed to strategically think about which ones to use, and when. Ellie and Abby both played relatively differently. Gameplay-wise the only thing that I think could have used some improvement is that the melee fighting was a little cumbersome. Loved the story too.

But you know, the game's "controversial", so here's where I address the ones I've just read about.

Eh, this isn't a very good criticism. Joel's death is the linchpin to the whole story. It's a good use of the, "gatekeeper dies" trope. It's totally meaningful, and completely makes sense within a world where there was a zombie apocalypse. Sucks that he died was violently murdered, but when you go on a killing spree on in a hospital them's the breaks.

Side note about Joel's killing spree. I'm not saying he was totally justified morally, but - let me tell you as a scientist - Abby's dad is a fucking hack. It makes no sense at all that there's something in Ellie's brain that can lead to a vaccination and that they have to kill her to get at her. Furthermore, the idea that he's qualified to do vaccine research or even has the facilities and resources to do it is absurd. This is something I wish they'd actually have brought up in order to add more moral grey to both Joel and Abby.

Yeah, you're supposed to. She goes out of her way to bring vigilante justice to a guy who was just trying to protect his surrogate daughter. Personally though, by the end I was totally rooting for her. Ellie, got a fuck ton of revenge in, and should have just left it drop (I was shocked that wasn't the end of the game by the way). Also, again, it's the zombie apocalypse - it happens.

I'm either way on this one. On the one had, had they have had Ellie kill her, well again, you reap what you sow and cycle of violence and all that. On the other I'm personally glad that she did because it was clear to me that - all things considered - she didn't deserve to be killed by Ellie, and had Ellie killed her, then Lev would have had a justification for killing Ellie.

Females with high testosterone levels is pretty common. Coupled with living through a war-like setting and it's not at all unrealistic.

The trans community is upset about issues surrounding Lev

I actually had no idea that Lev was supposed to have a female sex. I had interpreted the character as having a male sex the whole time. Sure other Scars call him "Lilly" and there's the line about being a "wife", but I had interpreted that as the Scars as having perverse cultural practices not as implying that Lev was transgender. There's also the fact that he has a boy's body and importantly voice.

A) if ND had intended the character to be trans they probably should have put more research into how a trans male child would actually be. There's also a sub-issue of using the character's "Death Name", but this seems overly critical because there really wouldn't be any other way to clue the player into the idea that Lev is trans.

B) My interpretation is correct and there is no issue.

A lot of the foraging and trekking bogs down the plot

Yes, I agree that it does. But I personally enjoyed it. It added realism to the game that would have been lost had they kept the plot pacing more rhythmic.
Last edited: Jan 6, 2021

The Last of Us Part 2 has Israeli politics within