Lonely Mountains: Downhill coming to Switch on May 7

Press release:
After the successful release of the award winning mountain biking game “Lonely Mountains: Downhill” for PC, XBox and Playstation in October 2019, Megagon Industries are happy to officially announce a release day for Nintendo Switch: Lonely Mountains: Downhill will be available in the Nintendo eShop from May 7th, 2020! The game will be priced at $19.99 / €19.99 / £17.99*.

About Lonely Mountains: Downhill:
It’s you against the rocky peaks of the Lonely Mountains! Get on your bike and experience four epic mountain landscapes. Take the relaxing scenic route or go off-road to find the fastest way to the finish line.

Ride along quiet mountain lakes, make your way through majestic forests or defy the wild sandstorms of the canyons. Explore each mountain at your own pace or face the ticking clock to unlock new bikes and difficulty modes.

Train your skills day and night to ultimately compete with the best riders in the world in the risky Free Ride mode and prove your speed-running talents on the leaderboards!

Lonely Mountains: Downhill is developed by Megagon Industries, supported by the Medienboard Berlin-Brandenburg, brought to life by our lovely Kickstarter Backers and published by Thunderful Publishing

About Thunderful Publishing
Thunderful Publishing was founded in December 2017 in Gothenburg, Sweden as a sister company to game studios Image & Form and Zoink. This new collaboration means that the companies can now act more forcefully and bring something very attractive to the market.
Click to expand... 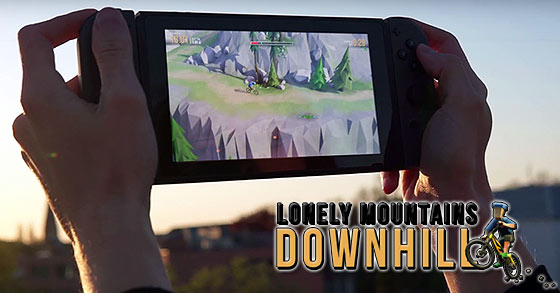 "Lonely Mountains: Downhill" is coming to the Nintendo Switch on May 7th - TGG

Megagon Industries and Thunderful Publishing are today very happy and excited to announce that their downhill mountain biking game "Lonely Mountains: Downhill" is coming to the Nintendo Switch on May 7th, 2020.

Creating a nintendo account on switch – so easy!
May 16, 2022 jf_by JonathanVan

The first part of the Minecraft update dedicated to caves and mountains will be available to download next week!
Jun 15, 2021 jf_by BigPete7978