An article where I ranked all the skins for this terror of the skies named Corki!

Read all about it on here: LoL Best Corki Skins That Look Freakin’ Awesome (All Corki Skins Ranked Worst To Best)

Here is a little sneak peak:

Is it a bird? Is it a plane? Is it Superman? No! It’s the aerial terrorist of the skies named Corki. People either love or hate this champion. People who hate him are usually the ones play against him and people who love him are usually the ones playing with him. He can also go either AD or AP. You just can’t build correctly against him. He’s a hybrid type and which is one of the most hated build types in all of League of Legends.

“Fly high shoot low.” (Video by League of Legends)
Let me be blunt about this champion and his looks. He is old and decrepit, he needs a whole visual update. Keep his abilities the same because they are broken but please update his visuals. Even though his abilities are old and have old effects, they do give me a nostalgic feeling and an aching for the old League of Legends. I wish you could switch your settings back to the old League and just have a fun time.

How To Get Original Corki: 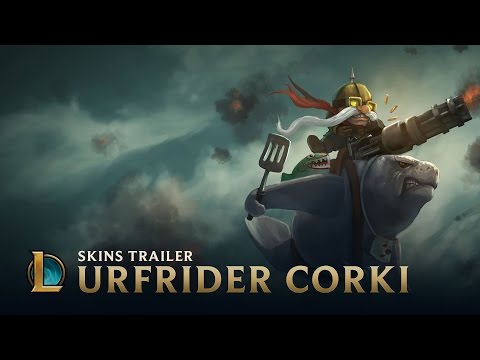 “Going down hard!” (Video by League of Legends)
The joke writes itself. Corki riding on a manta ray while murdering people. How better can it get? It doesn’t as memes go, except for one more skin but we’ll get into that one later. When it comes to looks it’s old. I even remember when it came out and it makes me feel old. This skin is giving me an existential crisis. Send help.

How To Get Urfrider Corki:

You can purchase this walking meme for 975 RP or 8$ in the LoL skin shop.
You must log in or register to reply here.