This is quite random, but it originally started after I made parody lyrics of a song in the "New Website Looks Great" thread. Carbon made a little comment about how there could be a possibility of merch...

Carbon said:
Also, is that a suggestion I hear in the lyrics, future t-shirts and hats? It is very possible! JoyFreak, live on long!
Click to expand...

and although I hadn't planned on making any, I decided to make some as an experiment. So JoyFreak has some semi-official merchandise now!

All four pieces of merchandise have witty comments and a tiny, tiny piece of text at the end that reads: "Designed by xenonVirus, inspired by Carbon et. al." (Et. al. meaning every single other member of the forum. Considering there are 912 of them, it would be hard to fit everyone's name on one piece of merchandise.

Without further ado, here are the four pieces of merchandise:
I'm actually quite delighted by how they turned out. I hope you enjoy them as much as me. (These are just prototypes at the moment, so they're not final.)

If any of you would like to put funny quotes on the merch, feel free to submit your ideas right in this thread.

This is just pure genius! I absolutely adore every single one of your captions! I would totally buy the phone case if it came in the iPhone 11. I hope people love it as much as I have! Good work, must have taken you a while!
OP
OP 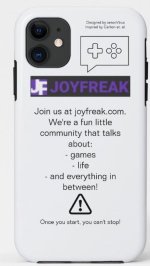 xenonVirus said:
Hmm. iPhone 11, you say?
Well, I have just the thing!

I absolutely love it! Although when clicking the link, it's asking me to sign in this time?
OP
OP

Okay, I think I fixed the problem. Here's the new link, which should work. If it doesn't, there's still the screenshot.

(I tested it by signing out and visiting the link - it didn't ask me to sign in. I then signed in, and it worked fine. I did the same thing on Incognito mode and it let me see the phone case.)

If you still have any problem, let me know about it, and I'll do my best to solve it.

Mug and T shirt along with Hoodie variations would be good. I think there needs to be some other mascot with new logo. I am sure that would make the merch more attractive.

Awesome work buddy, great starting idea, now you need to buy in bulk and keep in trunk/boot of car and take them to events to sell

Brad P said:
Its was just an idea put together to help promote if you read it says concept (general idea)

I'm sure if things got serious it be given to a professional to create
Click to expand...

I'm not a professional, by any means of the word. This was just a concept that I wanted to try out.
You must log in or register to reply here.

Totals may include hidden visitors.