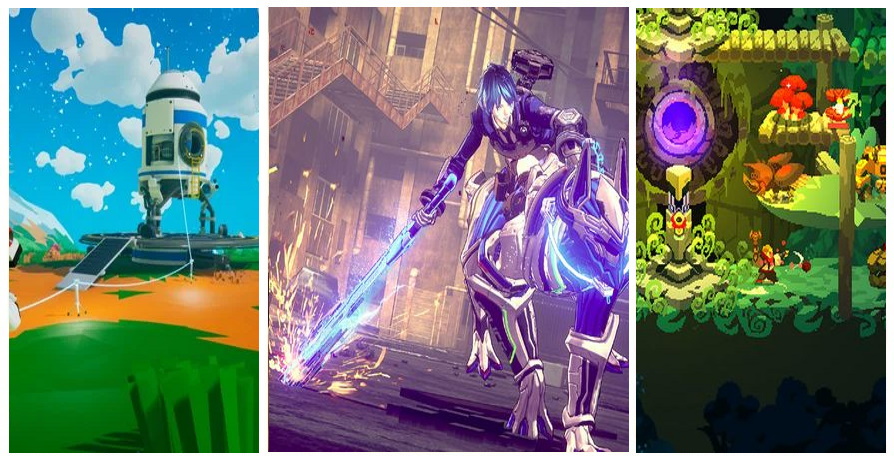 With the fourth instalment of the Metroid Prime series, Nintendo's legendary bounty hunter Samus is slated to—eventually—blast her way onto Switch. Still, when it comes to straight-up science fiction, the console's library is lacking. While some games, like Xenoblade, incorporate light science fiction aspects, the Switch is dominated by colourful fantasy-themed games.

However, these games frequently avoid the rich, slick, and darker science fiction aspects present in games like Metroid, Cyberpunk 2077 and Mass Effect. However, the Switch's sci-fi library is growing, and there are a number of excellent games on the system that science fiction aficionados will appreciate.

At E3 2021, Nintendo surprised fans by announcing a Metroid game, which was released much before the long-awaited Prime 4. Metroid Dread, on the other hand, is far from a filler, much to the delight of gamers. With exhilarating gameplay, dazzling visuals, and beautiful 2D biomes, Samus' newest quest captivates.

With familiar, approachable sidescrolling action, MercurySteam and Nintendo EPD pay homage to the classic Super Metroid. At the same time, several cool new aspects are introduced. Deep boss fights, hard stealth battles including robot pursues, and, most recently, the arduous "Dread Mode" are among them.

For this pick, I'm going off the usual path—Aegis Defenders is a hidden indie treasure on Switch that deserves to be discovered. The game, similar to Lost Vikings, combines tower defense/survival action with team platforming and puzzle-solving. Players will set up shop after reaching a particular point in a stage, creating upgradeable artillery and other fortifications to fend off waves of enemies.

While these styles appear to be very diverse, they are linked by some attractive 2D pixel art and intriguing narrative. Players control "Ruinhunters," who are entrusted with defending an ancient weapon from an evil kingdom. A streamlined multiplayer component contributes to the experience's depth and delight.

With beautiful pixel imagery and button-mashing action, this pleasing blend of future and past harkens back to the golden days of the NES. However, beneath the ostensibly straightforward façade is engaging gameplay and a riveting sci-fi fantasy plot reminiscent of Studio Ghibli's Castle in the Sky.

This science fiction game also has hints of Star Wars-like backstory and concepts. Players assume the role of the "Drifter," an energy sword-wielding hero who battles challenging foes while developing their abilities and tactics. Despite the fact that the voyage is only eight hours long, Heart Machine is packed with exhilarating gameplay and memorable experiences.

Indie studios have always been at the forefront of the sci-fi gaming sector, with efforts that frequently push the genre's boundaries and introduce new twists. Astroneer by System Era Softworks is a good example. Players assume the role of a wandering astronaut who explores enormous, randomly created planets in this sandbox adventure.

The goal of the game is to scavenge the alien wastelands for items that can be utilised to build, expand, or simply live. This interplanetary journey can be completed individually or in collaboration with a pal. The result is an enormous and humorous survival quest that is surprisingly complex. Astroneer resembles a more colourful, stylistic version of The Martian in general.

Take some addicting hack 'n' slash action, add a post-apocalyptic setting, and dress it up in classic 80s style. RAD could be the outcome.

Double Fine Productions' hilarious roguelike grips players with its tentacles and never lets go, pummeling them with a slew of monster opponents, lush wasteland environments, and frenetic gameplay. The bizarre critters must be fended off with one's own arsenal of mutant, toxified abilities. Throughout the procedurally created adventure, these funny talents are gained and upgraded.

While several studios have attempted to replicate Metroid and Metroidvania-style adventures, this 2015 cult hit stands out for its retro vibe and engaging run-and-gun action.

Axiom Verge is a good and faithful homage to Nintendo's famous IP, with an aesthetic that is quite authentic. This sci-fi shooter is a wonderful filler for Metroid fans waiting for Samus' next big release, with sharp controls, satisfying upgrades, and tough but approachable gameplay.

There's never been a better opportunity to jump on board 2K's undersea adventure than with 2016's BioShock package for Nintendo fans who missed the boat (or submarine).

This fantastic collection includes enhanced versions of BioShock 1 and 2, as well as BioShock Infinite and DLC material. The result is 50 hours of engaging first-person shooter action and a riveting Orwellian plot. Aside from the loss of BioShock 2 multiplayer, this is the definitive way for newcomers and veterans alike to enjoy this dystopian epic.

Some were startled to learn that Digital Extremes' Warframe would be released on Switch in 2018, given the game's stunning looks and epic nature. This port (courtesy of Panic Button) couldn't have come at a better moment, with a plethora of add-ons and refinements that same year.

Players in Warframe assume the role of the Tenno, an ancient warrior race that awakens from cryosleep to find themselves at odds with clone and robotic forces. Aside from the convoluted mod system, this free-to-play game is a fantastic and, to be honest, underappreciated third-person shooter. Players can look forward to a plethora of interesting treasures, unique fighters, and plenty of action.

While the elegant visual aesthetic entices spectators, the furious, fluid combat shines brightest here, with players spending the majority of the 20-hour odyssey slicing and dicing alien attackers. Unique weaponry and a comprehensive skill tree provide depth and variation to the arcade-style frenzy. In a nutshell, Astral Chain is a fantastic mix of Dynasty Warriors and The Matrix.

Id Software and Bethesda come out guns blazing with several Doom adaptations for Switch, making up for lost time on Nintendo platforms. Following its 2016 comeback, this fantastic sequel firmly establishes itself as one of the best shooters and sci-fi titles on the Switch.

This version provides the majority of the explosive, gory experience found in previous versions. This version, on the other hand, has its own merits in terms of handheld capabilities and surprisingly good motion controls. This post-apocalyptic demon-slaying adventure serves to remind Nintendo enthusiasts of the game's history.

Metroid Dread, a 2D adventure, coming to Switch in October
Jun 16, 2021 by Demon_skeith

Doom Eternal runs at 60FPS on all platforms but Switch
Mar 10, 2020 by Demon_skeith