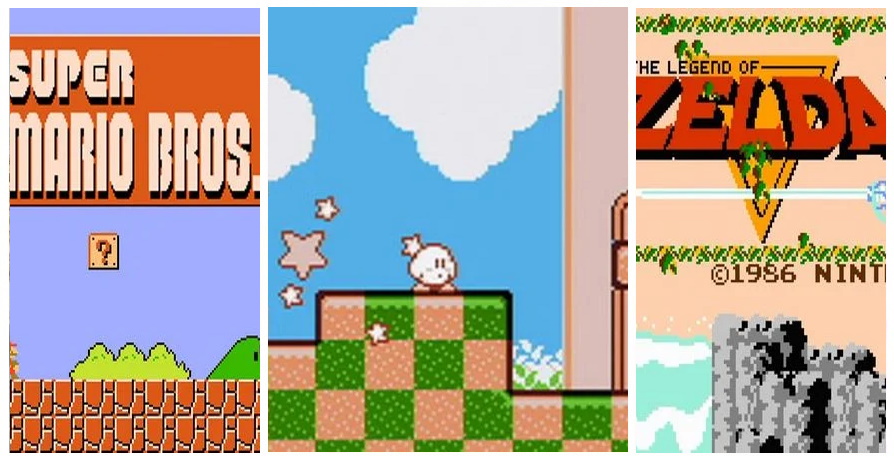 The Nintendo Entertainment System (NES) was a key component of the 8-bit craze. It aided in the revival of the video game industry amid difficult times. Nintendo's creative minds are continually coming up with new ideas. The Nintendo Switch, the company's most recent flagship platform, allows users to play old SNES and NES games in upscaled settings.

The first sequel to The Legend of Zelda is a very different experience than the original. The action-adventure series began to incorporate role-playing elements. Players may level up Link's health, magic, and attack in Zelda 2: The Adventure of Link.

Zelda 2: The Adventure of Link is an enormously delightful experience, even if it isn't as innovative as the first. It is possible to save the game on the NES, contrary to common perception. On the second controller, press UP+A to bring up the inventory screen.

Why not attempt Kirby's Adventure after finishing Kirby and the Forgotten Land to see where many of the franchise's enduring ideas came from? Kirby is one of Nintendo's most dependable franchises, and while 1992's Kirby's Dream Land is a classic, its sequel is a significant improvement. Kirby's Adventure is a delightful 2D platformer that follows the titular puffball through more than 40 levels, eating a variety of opponents along the way.

Copy Abilities, a mechanism that allows Kirby to acquire new moves by eating foes, was introduced in this instalment. This concept would be expanded upon in later titles, but it still works effectively in Kirby's Adventure.

A full NES video game collection would be incomplete without at least a couple Super Mario games. The internationally regarded Super Mario Bros. series was born on the NES.

Super Mario Bros. 2, the first Mario sequel, included Poisonous Mushrooms and a variety of characters to pick from. It wasn't a huge step forward in terms of gameplay, but it's still a classic NES platformer.

The first The Legend of Zelda game was released in this action-adventure game. It features a music that was reused in subsequent games. The game's depth is astounding. Like in all Zelda games, Link may shoot arrows and strike with a sword.

Even the most skilled gamers will find navigating across varied locations difficult. The Legend of Zelda does not include any platforming. It introduced Link as he attempted to save Princess Zelda from Ganon in Hyrule, a medieval-styled realm.

Donkey Kong isn't simply a historical relic; it's one of the most impactful games of all time with the best lore. This classic platformer has a familiar plumber progressively ascend up a tower in an attempt to rescue a damsel in distress from the eponymous ape in an arcade game and a launch title for the NES. The gameplay is simple and timeless, and the point system encourages users to replay it in order to beat their previous high scores.

Donkey Kong Jr. and Donkey Kong 3 are both accessible on Nintendo Switch Online, and they're also fantastic games. The original, on the other hand, cannot be beaten.

The original Super Mario Bros. on the NES is pure nostalgia. It was the best-selling game on the NES, selling over 40 million copies. Although this was not the first Mario game, it did have a repeating motif of a damsel in distress. It also introduced a slew of Mario power-ups that would later reappearance in subsequent Mario games. In Super Mario Bros., Bowser was green, and he was known as King Koopa. Before encountering the real Bowser, Mario had to deal with a slew of phoney Bowsers.

Although it isn't widely regarded as the finest Metroid game ever produced, it laid the groundwork for subsequent versions. Samus Aran, an interstellar bounty hunter, is the protagonist of Metroid. If the idea isn't enough to grab someone's curiosity, Metroid also comes with an engrossing music to go along with its engaging gameplay. Metroid stands out because of its unique blend of platforming and navigating through dangerous environments. In addition, the game had a significant effect on the development of Super Metroid.

Super Mario Bros. 3 is a timeless classic that improves on the Super Mario Bros. series in practically every way. The level design is well-thought-out, and the gameplay is simple. Players in Super Mario Bros. 3 can play with up to two other people. You may switch between Mario and Luigi by taking turns. Luigi lacked his sleek physique, but he possessed the ability to save Princess Peach. The Koopalings were first introduced in this game. It is the quintessential NES platformer, having been released in 1988.

This NES hidden treasure has amazing artwork and may have been ahead of its time. It's a beat 'em up-style open-world game with a vintage feel to it.

River City Ransom follows high school students Ryan and Alex as they attempt to save Ryan's girlfriend. Players get involved in the game's setting as they clash with student gangs. River City Ransom is a feature-rich game that is one of the greatest to play on the Nintendo Switch Online platform.

The first Ninja Gaiden, like the more current Ninja Gaiden games, features a high difficulty level. There isn't much space for error with the tight platforming and numerous foes.

For a game of the age, the artwork is fantastic, and the boss fights are thrilling. The story in Ninja Gaiden is thrilling. Ryu Hayabusa, carrying a Dragon Sword, goes out to avenge his father. This game is a must-have for everyone who has a Nintendo Switch Online and is a fan of the Ninja Gaiden series.
Click to expand...

W
Nintendo Switch 2 will be unveiled in 2024